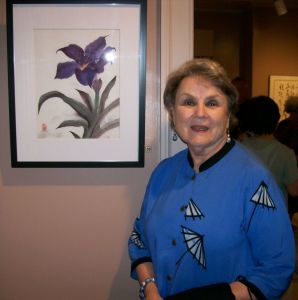 Kay has taken many painting trips including trips to: Japan that included travel and study with Robert E. Wood and another trip to study Japanese crafts; she traveled and studied in China with Dong Kingman; and recently traveled to Taiwan with Ning Yhee.

In May 2016 Kay was honored at the Highland Park Art Center Gala. Kay has been associated with the Art Center since she and her family moved to Highland Park from New York in 1972. At TAC Kay began as a student then became a teacher of children’s photography and Japanese painting and crafts. Her interest in Asian arts led to painting and study trips to Japan, China, and Taiwan. She and her late husband served on the TAC Board of Directors for a number of years.

Kay has had one person and group exhibits in Chicago and suburbs, New York City, Long Island, Washington DC, Mobile, Indianapolis, Duluth, and Toronto. She has received prizes and awards in many shows and her work is included in both private and public collections. Kay is member and board member of many art organizations including Sumi-e Society of America, Sumi-e Midwest, and Wilmette Art Guild. Link here to visit Kay’s website.